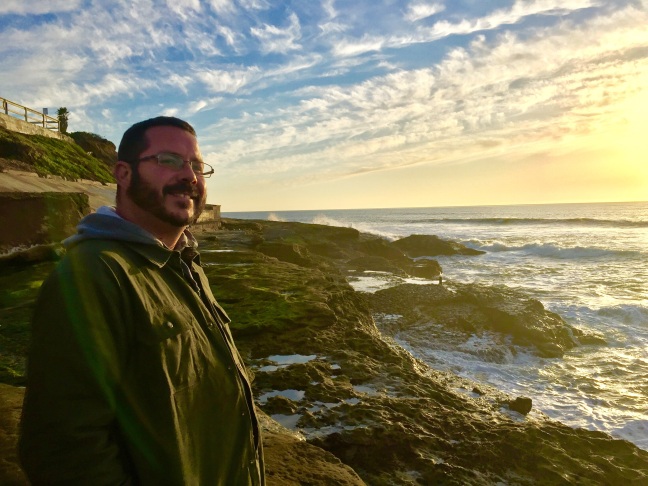 My friend of 25 years, Bokonon, just got shit on by his wife of three months. He wanted to get away from his family (because they were right about her) for Christmas, and asked me how much money I had. “None. I actually have negative money.”
“Well if we take your Prius, the money I’ll save in gas will more than pay for you.”
“Fuck it. If you’re buying, I’ll drive.” I said.
“Don’t fuck with me, bitch!”
“You don’t fuck with me, bitch.”

This was on Friday, the night of December 16th. I assume he’s drunk and will realize the next day that it’s a dumb idea, for whatever reason. The next day, we realize we have access to his aunt’s cottage in San Diego. I had stuff I had to do on Monday, so we left on Tuesday, 12/20/16, to give Christmas the middle finger.

I wanted to go the northern route for three reasons:
1. Fuck border checkpoints on I-10.
2. I know someone in Albuquerque that we can stay with.
3. I want to go to Sedona, AZ, anyway, and that’s North AZ.

Bokonon likes his alcohol when things aren’t all right in his world, which is any time, but especially now. I made him promise me in Texas that he wouldn’t bring his gun. He whined & whined, but ended up leaving it behind. Only after referring to me as a “Lib-tard”. I explained to him it wasn’t the gun that made me nervous. It was him, drunk, with a gun that I didn’t like. I know him, and he is a dumbass, which is why I love him, but there are lines.

We get to Albuquerque, to my friend’s place, at around 230am. Bokonon passes out on a futon in his studio apartment, and I pass out next to my friend (Mike). We wake up the next morning, and decide to stay another night because we can’t get weed until like 2pm-ish. So around 2pm, I decide to do three grams of mushrooms, and Mike did 2, at first, then another gram later… After we came back from the Rio Grande at sunset, I ended up with the most perfect picture…

Am I right?  ‘Twas fucking beautiful.  As we were coming down later that night, Mike decides it’s time for DMT.

Bokonon wasn’t down for the mushrooms, but since DMT only lasts 5-10 minutes, he was down for that. We sprinkled it on top of a bowl of weed, and I was the designated pipe catcher. I ended up leaving my body a little later that night, and Mike left to go to an open mic he had bombed the previous 3 Wednesdays… so he went to turn it around… That amazed me, and really amazed Bokonon. “He’s standing up in front of people right now?!”
“Yup. I know, right?”
“That is some ballsy shit. I like it!”

Mike ended up turning it around, after all… somehow. It would’ve been cool to see, but I don’t think I could’ve handled seeing him bomb in that state of mind. We end up going to sleep a little later, and left the next morning. It RAINED all the way from Alburquerque to Winslow, AZ. We stopped in Flagstaff around 5pm for the night. I got a bottle of wine and recorded Bokonon telling stories while drinking… It’s pretty good shite. I’d forgotten he did about a week and a half in a Belize jail for trying to smuggle ketamine back to the states for his non-existent Texas farm… He did this through their dept of agriculture… Some of these stories definitely need to be transcribed.

We get to San Diego the next night, and head straight for Ocean Beach.  I got rolled tacos and fell in love with them.  Then we get to his aunt’s cottage in North Park.  He needs vodka, so we walk to the liquor store, and I see a place called “Lips”.  Later, I found out that it’s a badass drag-show dinner theater.  We did a few things around San Diego, but I wanted to come to L.A. to see if I could get work (as a courier).  I left Bokonon in San Diego, and I’m staying at my friend from high school’s place.  She also lived down the street from me during my time in Austin, so it’s a home-away-from-home situation.  She’s just now getting into making edibles, and I have enough in my bag to put down an elephant, and she’s making more.

Damn that’s gonna be a long drive back…

UPDATE – 10-20-2020 – Bokonon died of a self-inflicted gunshot to the head on 11-26-2017. He spent his last Christmas with me, then his last birthday with me, exactly 3 weeks to the day before mine. That was March 7, 2017, and we hadn’t seen a lot of each other since this trip. Didn’t see much of him after, either, but we talked. As batshit as he was, I truly believe he was the only person to truly understand me and love me unconditionally. GOD, I miss that dude.

…And just cuz I know people wanna ask – we’ve been 100% platonic since I was like 21 or something. He was just a different kind of soul mate😥

This site uses Akismet to reduce spam. Learn how your comment data is processed.

©Luci Kolb and LuciKolb.com, 2019. Unauthorized use and/or duplication of this material without express and written permission from this site’s author and/or owner is strictly prohibited. Excerpts and links may be used, provided that full and clear credit is given to Luci Kolb and LuciKolb.com with appropriate and specific direction to the original content.